To declare your organization a sanctuary space, or to support the art sanctuary initiative and receive occasional information, continue reading.

Art Space Sanctuary has also been running sanctuary/safe space trainings for institutions around NYC and nationally.  If you are interested in a training for your space/organization/staff write to wesanctuary [@t] artspacesanctuary.org

We also organize and cosponsor actions. To see some of our previous actions click here.

What is Art Space Sanctuary?

Cultural spaces are also civic and political spaces that should confront or be confronted by their responsibilties as such. At the most basic level, they must ensure that everyone has access to education, culture and the arts without any fear.

To make this possible, we ask that cultural and arts institutions, from libraries to theaters to museums to galleries and more,  join other groups in declaring sanctuary – an important strategy with symbolic, moral and practical efficacy.

The goal of the sanctuary movement is to create safe spaces, spaces that declare their refusal to condone and abet actions and laws that violate justice and conscience. Sanctuary provides a broad umbrella for an intersectional coalition of people to stand together, build networks and create spaces of convergence. It is a horizontal, non-hierarchical space of inclusion and participation.

Sanctuary has many levels. You DO NOT have to shelter persons in danger of deportation to declare sanctuary. You do not have to be a place of worship. You can be a safe space, offering information and resources to the public; you can agree to not ask for immigration status or divulge information to federal law enforcement; you can agree to not allow immigration enforcement agents into your space without a court-ordered search warrant…

All and any of these policies are within the law and constitute sanctuary.

Art and cultural spaces and institutions that want to declare sanctuary should at minimum agree to:

In addition to these, each space can opt to adopt further policies such as:

Declare your Art Space a Sanctuary

Art Spaces Declaring themselves as Sanctuaries

If you are an art or cultural institution that has declared sanctuary please notify us at: [email protected] or register here.

WHAT YOU CAN DO

Signage
Signs are a good way to let people know what kind of a space they are entering – addressing both those who should feel safe and agents whose undeclared presence endangers us. There are important signs and declarations you can post around your institution:
a/ Safe Space Entry Sign
b/ Sanctuary Logos – we recommend that Artspace Sanctuaries like other sanctuary spaces use these in their physical space as well as in their on-line and social media presence. Also, in protests. On Bodies.
c/ Lists & Maps of Sanctuary Spaces in NY – houses of worship, art spaces, educational organizations, and businesses like restaurants that have declared sanctuary on some level. It’s good to know where they are. Support these spaces.

Be a Sanctuary Hub
As a sanctuary space, you can be a hub for the dissemination of resources to citizens and non-citizens alike, and set up coalition-building programs and host trainings and other events. Here is a folder of materials you can print, hand out, or leave around:

New Sanctuary Coalition’s “Beyond Your Rights” brochure goes into strategies of mutual protection – Spanish here and English here
New Sanctuary Coalition’s Rights Card to hand out in case of a ‘situation’ – everyone should carry these
Restaurant Opportunities Center (ROC) has info for restaurants that want to become part of its sanctuary network
NILC has legal resources for employers/employees on workers’ rights and workplace issues, and for schools and universities
United We Dream rights information in multiple languages

As a sanctuary hub you can also be part of the New Sanctuary Coalition (NSC) program called SanctuaryHood whose goal is to create protected and aware neighborhoods, through decentralized and intersectional events, programming, training, and mutual support. For more information, you can contact us.

Institutional Training
For larger institutions, we have put together a key module for training staff on good sanctuary policies and strategies. If you are interested, please contact us.

Programming
Organize events and let us know by replying to this email.
Use #artspacesanctuary in your solidarity events.

There will be many more events and ideas as we move forward. Stay Tuned.

Spread the Word
Tell others to sign up in support of sanctuary. Please tell institutions to declare themselves sanctuary. Send them this site.

Guide to Levels of Sanctuary

No Info, No search – Like the city, art spaces, universities and other organizations too can declare that the immigration status of their users and members will not be requested and any such information will not be handed over to ICE. Federal immigration officials will not be permitted to search premises without a court-signed warrant.

Safe Space – Sanctuary can simply be a place to feel ok and safe, where you know you won’t be mistreated or dismissed, where you can speak your mind – the more such places there are in the city, the better. Many sanctuary spaces also offer safe spaces for a range of precarious lives, including LGBTQ youth.

Short-term Sanctuary – Sometimes when there are raids in neighborhoods or workplaces, people need a place to just sit and wait for a while. So short-term sanctuary are places where people can go in case they hear of raids in their neighborhoods to workplaces, whether or not they have deportation orders.

Physical Sanctuary – this is highest and rarest form of sanctuary, and the kind that can potentially lead to legal complications. Physical sanctuary is where people can stay until their deportation hearing is resolved. This is not used often.  This is the highest level of commitment. It entails commitment from the person seeking sanctuary as well, since it means the person cannot leave the premises.

People and institutions may have concerns or fears about the implications of declaring that theirs is a sanctuary space or institution. Here are a couple of common concerns art spaces may have about declaring sanctuary, and what can be done to manage these concerns.

Will Declaring Our Institution a Sanctuary Space Expose us to Criminal Liability?

It’s important to remember that there are many ways in which an institution can provide sanctuary, most of which are perfectly lawful. The word “sanctuary” itself has no legal status, but colloquially may refer to a spectrum of support for non-citizens and threatened communities. It may refer to a show of symbolic solidarity with immigrant individuals and families, such as issuing statements of support in the media, or it may refer to the dissemination of information, such as know-your-rights resources to the immigrant community, or it may refer to the open refusal to share information about a person’s immigration status with federal immigration authorities. Note that city and other institutions are under NO legal obligation to share information on immigrant status with federal agencies or agents, for example with Immigration and Customs Enforcement (ICE), the agency tasked with finding and forcibly removing undocumented human beings from the US). All of this is perfectly legal and within the rights of any private institution to perform.

Sanctuary may also refer to providing material support to non-citizens in danger of deportation, such as providing temporary shelter to such a person. This is typically known as “physical sanctuary.” Providing physical sanctuary may incur criminal liability, and any institution considering providing this kind of support should consult with a competent attorney to understand the consequences.

Will we need to house or provide shelter to persons in danger of deportation?

And if so, will persons in danger of deportation flood our institution with requests for physical sanctuary?

Again, there are many ways for an institution to declare sanctuary, and many of these do not involve providing physical sanctuary.

If your institution does decide to provide physical sanctuary, it would be your choice about whether or not you were doing so publically, and of course you would still have control over how many individuals you accepted. It is good to keep in mind that most people, even in danger of deportation, would rather not enter into long-term physical sanctuary.

So remember, sanctuary implies different levels of commitment, without necessary legal entailments. Nevertheless, we are asking you to commit to the highest level of sanctuary possible.

The sanctuary movement has also been critical in providing real legal aid and other resources to immigrant and minority communities. So it needs bodies, minds and money. Sanctuary needs people who can volunteer, can help spread the word on resources, people who can help with legal issues, petition officials constantly; it needs financial resources; it needs lawyers… We ask that you encourage your staff and members to volunteer, contribute financially or recruit lawyers.

In the aftermath of Trump, Sanctuary has resonated widely in national debates especially on campuses and in sanctuary cities. But sanctuary has been a movement since the 1980s and has developed, in NY, through the New Sanctuary Coalition of NYC since 2007.

The New Sanctuary Coalition of NYC is an interfaith network of congregations, organizations, and individuals, standing publicly in solidarity with families and communities resisting detention and deportation in order to stay together. It recognizes that unjust global and systemic economic relationships and racism form the basis of the injustices that affect immigrants. It seeks reform of United States immigration laws to promote fairness, social and economic justice.

The New Sanctuary Coalition of NYC (“the Coalition”) has grown from a half-dozen congregations to a City-wide Movement, working in coalition with NYC’s major immigrant organizations to reform immigration enforcement practices and policies, both locally and nationally, with a special focus on preserving family unity. Unlike other faith-based immigration reform advocacy groups, the Coalition operates at the congregational, grass-roots level, and focuses its efforts on reform of current detention and deportation practices, both nationally and in the NYC area.

Early in 2010, the Coalition gained national attention for its successful efforts to prevent the immediate deportation of Haitian immigrant Jean Montrevil, the father of one of its “Sanctuary Families,” and a member of Judson Memorial Church. And over the past two years, the Coalition has sparked a major ongoing campaign in NYC – a campaign that is looked to as a model for the nation – in de-coupling local law enforcement from immigration enforcement.

The new Movement was inspired by the 1980s “Sanctuary Movement.” That Movement had enlisted churches to transport, house, and hide refugees fleeing to the US from the civil wars in El Salvador and Guatemala. In 2007, religious leaders in Chicago and California, plus Juan Carlos Ruiz, then a Catholic priest working with a Mexican immigrant organization in NYC, envisioned a “New Sanctuary Movement,” to engage faith-based groups specifically in support of the 12 million immigrants living in the US without legal status to stay here. Instead of hiding them, however, the New Sanctuary Movement proposed to publicize their stories, to put a human face on the issues, raise public awareness of their plight, and encourage legislative reform.

“A Radical Expansion of Sanctuary: Steps in Defiance of Trump’s Executive Order”
http://www.truth-out.org/opinion/item/39224-a-radical-expansion-of-sanctuary-steps-in-defiance-of-trump-s-executive-order

“Sanctuary Campus: Resistance and Protection Within and Beyond the University”
http://averyreview.com/issues/21/sanctuary-campus 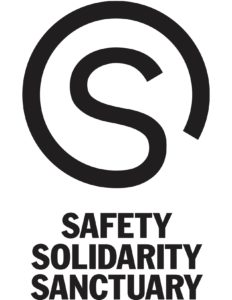